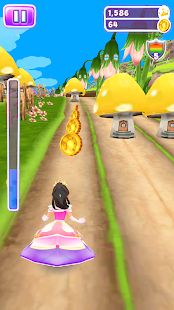 Fairy Run - Princess Rush is an exciting FREE endless running game for Girls and Boys. Unlock and play as the prettiest and most magical princesses in the world!

- Slide, sprint, jump and dodge to avoid all kinds of obstacles!
- Collect enough coins and see the rainbow fall from the sky to reward you with a coin boost!
- Choose to play as 8 different Princesses with different accessories and dresses
- Break through obstacles with the rainbow shield
- Discover exciting powerups that will help you reach the highscore
- Use your hard earned coins to unlock new Princesses, thrilling powerups and more!
- Complete daily challenges to earn exclusive and exciting rewards
- Amazing 3D graphics
- Free updates add new Princesses regularly

In Fairy Run - Princess Racing Rush the longer you run, the faster you will become as you jump over signs, slide beneath birds and dash past other obstacles such as magical houses made of flowers that are waiting for you in the forest and subway. Fairy Run -
Princess Racing Rush is full of action and excitement and will provide hours of fun for boys and girls.

Whether running through the magical streets of the subway city or surfing past temples, in

Whilst exploring the Fairy Run magical fantasy forest, be sure to stay on the lookout for awesome power ups which will help boost your score in no time! Find as many power ups as possible and watch your score multiplier increase as you rush closer to beating the highscores!

Don’t worry if you’re going to hit an obstacle, simply double tap the screen to activate your super cool rainbow shield, which will allow your fairy to rush through obstacles for a short time!

After collecting enough coins, you can head over to spend them in the Fairy Run - Princess Racing Rush shop which has lots of cool magical items to unlock. You can unlock boosts and power ups to help you reach higher scores, or you can buy new fairy princesses who have even cooler dresses and accessories! Will you be able to unlock all of the princesses and their queen - Candy Queen Aurora?

Earn exciting and exclusive rewards for coming back to Fairy Run - Princess Racing Rush to run with the princesses every day! Complete the daily tasks to receive these rewards which will help you reach the highscore!

Princess Fairy Run has been carefully designed for boys, girls and families to have ultimate fun!

Please rate us for future improvements and updates!
Invite your friends to play the cute, magical, addictive games designed for Girls & Boys created by Green Tea Games and challenge them to beat your highest score!

check_circle App data is ready to be downloaded and restored.